Select the QRS PNO Experience Kit that is right for you 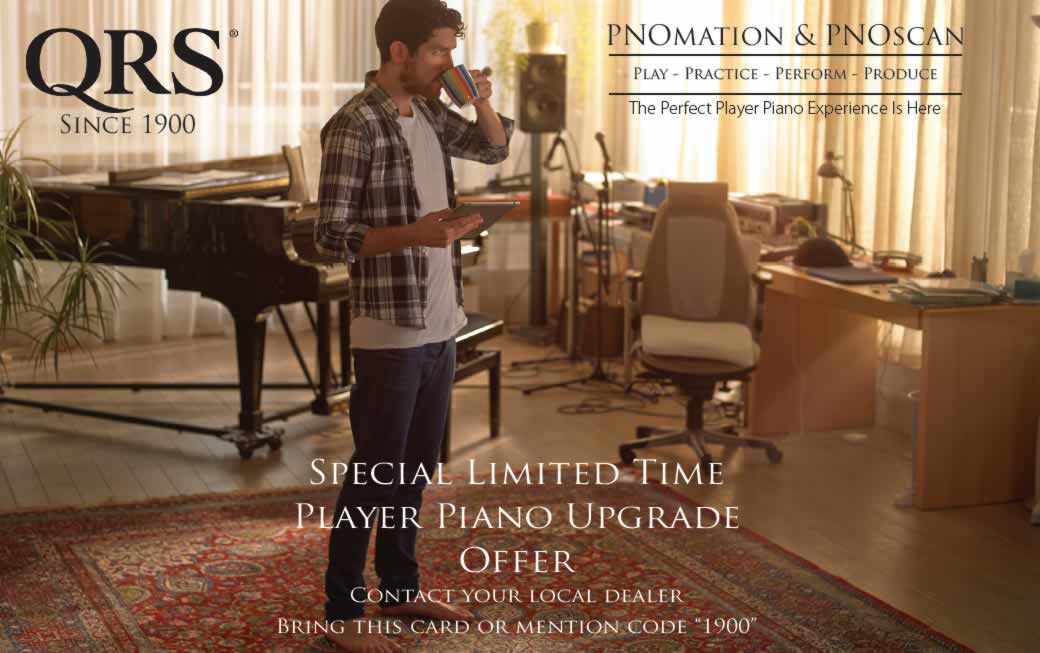 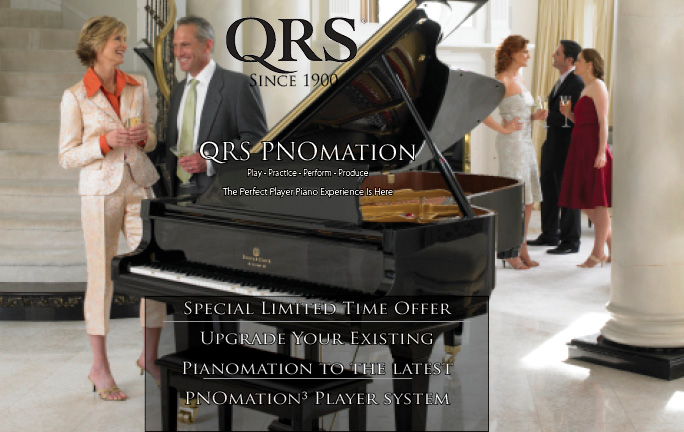 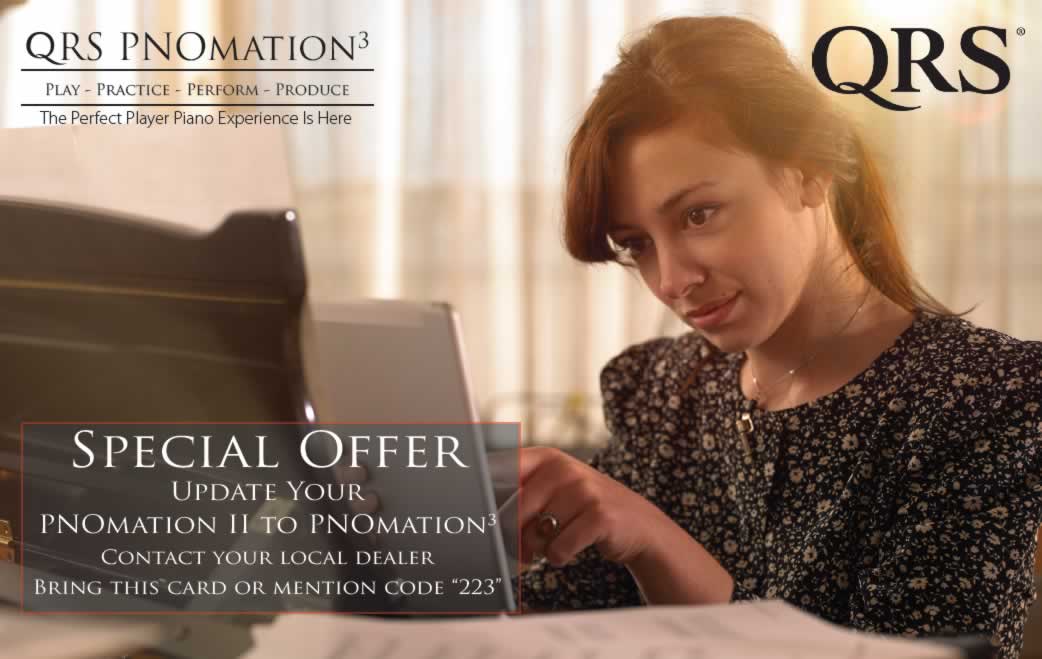 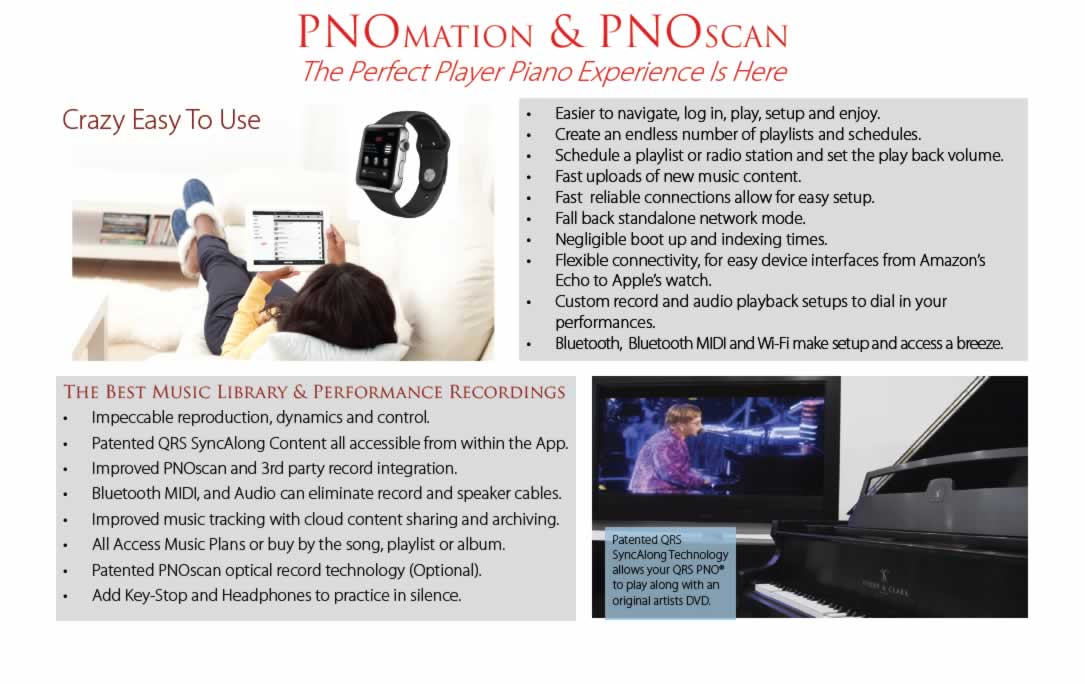 All of QRS's PNOmation Player Piano Systems are designed to complement the life of your piano. Since you will more than likely own the piano for a long time or want to sell it at a reasonable value you'll want to know that the player inside compliments its life. There are three things to look at in that respect - the components - are they built to tolerances and with materials that can handle the various climates and conditions while being played over a long period of time, the manufacturers history of offering an upgrade path to the latest technology without an expensive replacement, the manufactures history in the business and the music library. QRS's PNOmation is the only system that since its introduction has been offering a migration path to the latest technology. Its use of the finest components allow the customer the confidence to move forward with an upgrade with knowledge that the rest of the system remains solid. QRS's use of longer fully encased solenoids with Teflon impregnated solenoid plungers delivers much more accurate control over the range of motion. They also resist corrosion and are self-lubricating. A lost motion cap on the bottom insures proper throw, that without can never guarantee you are delivering the dynamic called for. Next is dynamics - a longer plunger and solenoid delivers more accurately the dynamic called out for in the music. This dynamic can be of the new standard HD MIDI or the old MIDI. QRS supports both.

Controller technology traditionally has referred to the Box that hangs on the piano where you insert your media. The problem is the only people that love those boxes are the people who design them. After all who wants a box hanging under their grand piano? QRS has seen the writing on the wall for some time now and completely migrated to an embedded web app system. While our competitors are selling CDs and Floppies or falsely relying on an internet connection to stream music, we have taken the bold step to include all of our content on board. No hiccups in playback, easy to navigate, easy to control all aspects of your player system -with a simple touch screen user interface. No reliance on a network connection to the outside world and instant purchases of your content. Don't be fooled by competitors who also sell Apple products as an interface have the following issues we do not. They force the use of ITunes - so now a PC or Mac is required - your player music is mixed with your regular music - another thing to think about and plan around, the music has to be transmitted from the device (iPad or iPhone) to the piano - it's not on the piano - so you have to be in range - on the same network ... and the stream cannot be interrupted. Then of course you want to be able to control all aspects of your pianos performance - which is simply not doable with the built in media player; we mean all aspects not just a speaker and piano adjustment - from record to solenoid alignments. And last but not least we do not lock you into one brand of product - any Wi-Fi enabled device will control your piano. Really it's that simple.

The best record technologies sense the movement of the keys continuously. This means they see the entire movement of the key up and down. That data can then be used to set trigger points and assign controller values. Leaving the most accurate recording possible. The sensors also need to be non-evasive, in other words nothing effects the touch of the key, there is no mechanical link to cause potential noise or breakage. Adding weight to the key is a way to add sensors but they modify the touch of the action and action repairs become a problem. There are several types of recording technologies currently used are hall effect, flag, tft, optic - flag being the most popular and cheapest is used by the Japanese and some Korean knock offs of an early Gulbransen strip. TFT has a mechanical element to it and has been shown to be inaccurate. The only real solution is an optical sensor - but even these have issues unless you are able to filter out the noise from lights, smoke, radios and adjoining sensors. QRS's patents speak to this capability - without it the setup of an optic sensor is much too delicate a procedure and prone to hot notes, false triggers and erroneous events. PNOscan is by far the best product ever produced for recording a performance on an acoustic piano. Recently long distance learning has been pushed. Off the shelf products accessories make it happen. These products are available to QRS. QRS's systems are compatible if this is the direction you want to go.

The music library should be a huge factor in your buying decision. It is not only the quantity of music but most importantly the quality, artists and variety. QRS has been in the player piano content business for over 112 years. In the days of the old roll player pianos QRS was the largest and most recognized music company in the world analogous to today's Sony's and BMI's. QRS has the largest and most famous player piano music library in the world. Many of the greatest artists of the 20th century recorded for the QRS Music Roll Company. We still make rolls today. The best of these recordings are available to you today on PNOmation IIs player systems. QRS does not stop there, it has patented music technologies that ensure their leadership well into the next 20 years. Their QRS SyncAlong technologies allow your piano to play along with the popular music you love today in audio or video form. Nobody else has the SyncAlong capabilities that QRS does, QRS's competitors answers to our offerings are at best convoluted and of questionable quality requiring the end user -you - to do most of the work. QRS has 4 times as much SyncAlong type content than its competitors. The competitors treat it as more of a "me too" sales item than serious content for the consumer. Our competitors solution is a CD and a 3.5 inch floppy, and others require you to download several files, use ITunes, merge the two with an app... the others simply do not have an answer. All that said QRS still pursues artists for recording and continues to produce solo and performance content that is relevant to today's music consumer.

All recordings in this series are solo piano performances derived from the famous QRS piano roll library archives. QRS has been manufacturing piano rolls since 1900 and has over 5,000 master recordings and 45,000 music rolls in its archives. In 1912, the invention of the QRS Marking Piano enabled QRS to begin manufacturing rolls played by the original artists and thus begin amassing a library of legendary performances by great artists such as Fats Waller, J. Lawrence Cook, Liberace and many others. Now you can discover the legend and the fun firsthand with some of the most popular selections from these classic performances that we've converted to Digital Content.

Our Performance Series are recordings live solo piano performances. They are of full expression that are full of expression and showcase the talents of accomplished piano artist such as Joe Augustine, Charles Czarnecki, Mike Jones, Larry Kass, Ken Kaufman and many others recorded live in the QRS recording studios in New York.